Osteoporosis, a bone disease affecting seniors and menopausal women is a growing concern causing over 8.9 million fractures each year worldwide (Johnell et al, 2006). In India, there are an estimated 25 million people who may be suffering from osteoporosis. Both men and women are affected with the disease at an earlier age compared to the West (Malthora and Mittal, 2008).

Liquid calories or high sugar drinks are often consumed less rationally than food that is chewed. Most people do not “count” the calories they drink. However, a great deal of damage could be coming from liquid calories. 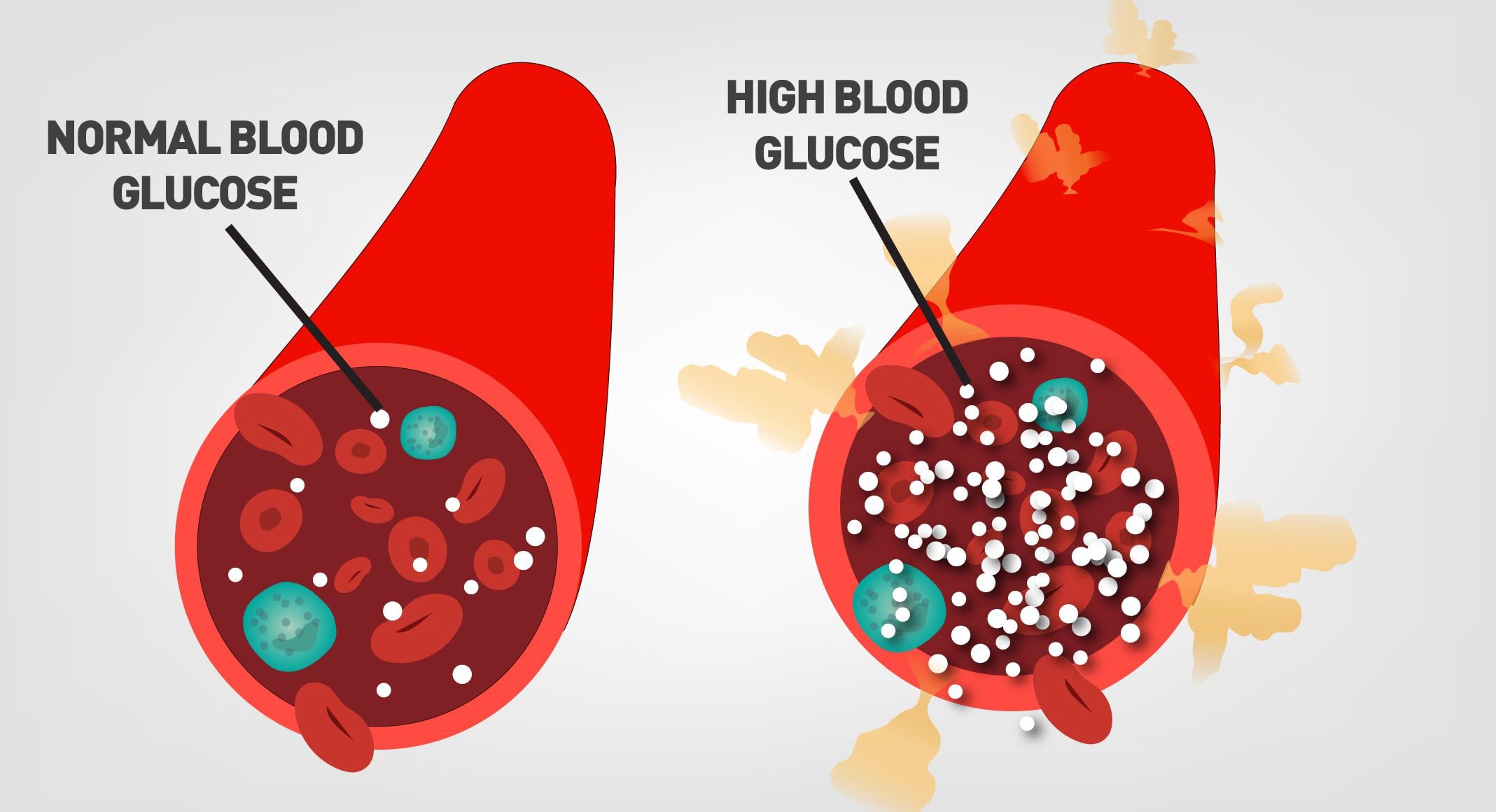 These drinks are consumed casually at home as a replacement for water, at entertainment centers, after sports, and at social events. Many people quench their thirst with these drinks instead of water, ignoring the calorie labels(a.k.a warning labels) on them. The fine print shows an alarmingly high level of sugar that research studies have found to be associated with a risk for obesity and thereby an increased risk for diabetes. These drinks confer risk of diabetes.

While the risk for diabetes associated with drinking sweetened beverages has always been known, a new study shows the extent of risk. Researchers from Karolinska University in Sweden showed that consuming 2 glasses of sugary drinks every day could double diabetes risk.

In the study, two or more of 200 milliliters servings(~ one and a half cans) of the sugary drinks when consumed every day was found to increase the risk for diabetes by two-fold. People who preferred drinks that were sweetened with artificial sweeteners were equally at risk for diabetes.

Josefin Edwall Löfvenborg who is a nutritionist at Sweden’s Karolinska Institute spoke about the relevance of the study “Not all studies have been able to look at sugary and artificially beverages separately.  (but) it's getting more and more established that soft drinks increase the risk of type II diabetes."

"We wanted to see the effect of larger intakes than two," stated Löfvenborg highlighting the second part of the study that determined diabetes risk among people who drank more than 1 liter of sugary drink every day. The risk was found to increase 10 fold in this group, reiterating the effect of consuming high sugar drink on diabetes risk.

Cups quickly add up to a liter in a day: a few cups of coffee or tea a day, some canned beverages, a can of soda or cola, cappuccino, lassi, etc. all can add up to contribute towards the risk of diabetes.

Is soda the new cigarette?

High sugar drinks like sugary soft drinks are being additionally taxed in places like California and Berkley in the U.S. In Kerala, India, fat tax of 14.5% is levied on junk food at International food chains which include burgers and high sugar drinks consumed in these chains. Such high tax is levied to lower consumptions as high sugar drinks are implicated in the rising obesity epidemic and diabetes numbers in the world. In California and Berkley, soda consumption has dropped by one fifth after the tax on soda was executed.  Cigarettes are taxed similarly to lower consumptions, this boils down to soda being on the same plane as cigarettes.  [/idea]

Not everyone reacts equally to dietary risk factors, certain genes have been shown to modify (predispose or protect) disease risk. In a recent study, it was found that people with certain gene variants were at a higher risk for diabetes even when they consumed the same dietary components as others. This would mean that people who consume high sugar drinks may have a higher risk for diabetes but the level of risk may be modulated by the genes they carry.

Family history is an important genetic risk factor for diabetes. The risk for diabetes is increased if both parents are diabetic, as compared with either parent or neither parent being diabetic. Predisposition to diabetes can be determined through a simple and economical saliva-based genetic test.

Xcode’s Health Genetics test is a companion to the Master Health Checkup (MHC). This genetic test covers predisposition to diabetes, obesity, hypertension and heart disease in one, low-cost test. When taken together with blood test data from MHC, it provides a complete picture of the various risk factors. Nutritional, dietary and lifestyle counseling is provided to lower the risk towards the normal range.

You can write to us at hello+support@xcode.in  to find out more.

Vitamin D is a hot topic these days. We get it from the sun, fortified milk, butter, ghee, soybeans, soy milk, cheese, eggs and certain types of fish and mushrooms. It’s usually credited with promoting bone strength and overall health. And vitamin D deficiency has been linked to many chronic diseases, including, but not limited to, infectious diseases, autoimmune diseases, cardiovascular diseases, diabetes and cancer.

A recent study revealed that a whopping 70% of the Indians suffer from vitamin D deficiency. This study further adds that sunlight exposure is not a tenable solution to obtain vitamin D sufficiency among Indians, as darker skin has high melanin content and produces a significantly lesser amount of vitamin D when compared with individuals with fairer skin. Indian skin tone requires daily sunlight exposure of at least 45 minutes to produce sufficient amounts of vitamin D.

You may also need more vitamin D depending on the genes that you carry. Variations in two genes, GC and VDR, are responsible for lower vitamin D levels. The GC gene produces the main transporter of vitamin D in circulation while VDR  gene produces vitamin D receptor which allows the body to respond appropriately to vitamin D. Compared to others, people carrying one type of GC and one type of  VDR  need to ensure they have adequate sun exposure or dietary intake of vitamin D to avoid deficiency.

Factors such as age (old age), body weight (people with a body mass index of 30 or greater), problems of the digestive tract like Crohn’s disease and cystic fibrosis, kidney problems results in low blood levels of vitamin D.

The National Institute of Nutrition recommends 200 units, 5 mcg of vitamin D everyday. The following are the recommendations from the vitamin D council:

Want to know what type of VDR and GC gene you have, Xcode’s nutrigenetics test can tell you what versions of the VDR & GC gene you have in your DNA. You can also learn about how your genes may influence other traits, including your risk for certain diseases.  You can write to us at hello@xcode.life.

Diabetes is the most challenging health problem of the 21st century with India being the diabetic capital of the world. More than 65 million Indians are affected from type 2 diabetes and the number is expected to double in the next 20 years. The most shocking news is that 270 million Indians are below the poverty line and yet there is an increase in the diabetic peak. Unlike other health conditions, diabetes does not seem to be inherited in a simple pattern, it is twisted and complicated with a combination of genetic make-up and environmental factors. Yet, most people are born with higher susceptibility to develop type 2 diabetes. According to ADA, the risk of developing type 2 diabetes is:

Type 2 diabetes is mainly caused by an interaction between our genetic makeup and our unhealthy lifestyle choices. Type 2 diabetes is a polygenic disorder where numerous genes have been identified as risk factors. The variation in genes confers some impairment in insulin secretion, utilization, and glucose & lipid homeostasis. If you have type 2 diabetes your body does not use insulin properly. This is called insulin resistance. At first, your pancreas will produce extra insulin to make up for it but, over a period of time, it cannot make enough insulin to keep the blood glucose at normal levels.

The root cause of type 2 diabetes is obesity. It runs down the family as they tend to have a similar lifestyle and eating pattern. Obesity is 80% correlated with diabetes. If you have a family history of obesity it becomes difficult to figure out if your diabetes is mainly caused due to lifestyle factors or genetic variations. It is natural that sedentary parents tend to have sedentary children and their unhealthy eating habits are passed on to the next generation. However, studies have shown that in obese individuals, by losing even 4 kg of the body weight, can reduce the risk of developing type 2 diabetes.

Here are 5 alternative healthy foods to knock out type 2 diabetes:

It’s never too late to start caring for yourself and Xcode provides products and services based on metabolic and fitness genotyping. Even if you carry a genetic risk variant, you can still minimize your risk by understanding your genetics and choosing the right food and lifestyle options that are compatible with your genetic makeup. So take action today to prevent and knock out diabetes.