GA‐binding protein (GABP) transcription factor gene, also known as the Nuclear Respiratory Factor 2 (NRF2) gene is associated with the synthesis of GABPB1, a key transcriptional activator of numerous nuclear genes which produce various mitochondrial enzymes. The variants of the GABPB1 gene that code for the beta1 subunit of NRF2 protein have been shown to be associated with endurance. Specific alleles of this gene are known to either increase or decrease GABPB1 which stimulates mitochondrial biogenesis upon exercising.

A study conducted on track and field athletes showed that people with the A variant of the gene were more common among endurance athletes than non-athletes. In a similar study conducted on elite endurance, elite power and non-athletes, it was found that people with the A variant were found to be more common among elite endurance athletes. 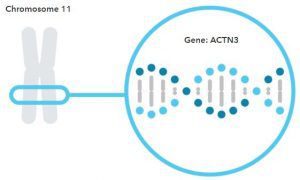 
Studies have indicated that people lacking the R allele of ACTN3 may have an advantage in endurance based sports. Such people also seem to have higher proportion of slow twitch muscle fibres and reduced fatigue which is advantageous in endurance performance.