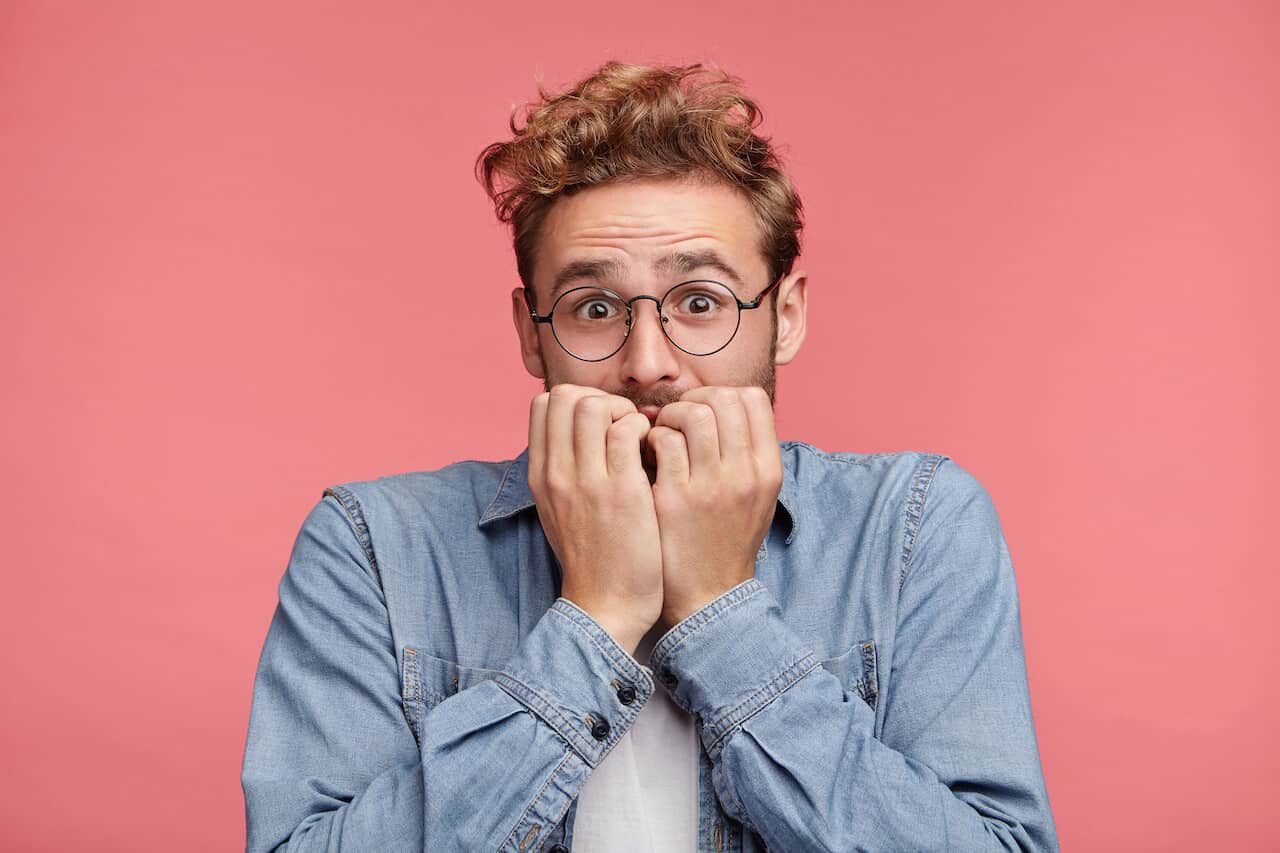 Anxiety is a mental condition that is characterized by feelings of excessive nervousness, worry, apprehension, and uneasiness.

These can interfere with a person’s behavior and change how they process emotions.

"Anxiety is one of the most common mental disorders; affecting 40 million adults in the United States.

How does anxiety affect your body?

Anxiety affects both your physical and mental well being, resulting in short or long term effects on your body.

From physical pains to a weakened immune system, anxiety can take a toll on your body. These effects include:-

What are the types of anxiety disorder?

The term anxiety encompasses a multitude of mental disorders which include:

How can you tell that you are suffering from an anxiety disorder?

Although an accurate diagnosis can be provided only after clinical evaluation, there are a few signs and symptoms which could be a reason enough to suspect anxiety disorder. These include:-

"If you experience any of the above-mentioned symptoms for long durations,  seeking professional help for suitable diagnosis is advisable.

What can trigger your anxiety?

Anxiety triggers can vary from one person to the next. Often, it is more than just a single trigger. However, a lot of people suffering from anxiety share a said set of triggers. These include:

How can you deal with your anxiety?

If you feel that you are experiencing symptoms of anxiety, seeking professional help should be your priority.

Other than the help the professionals offer, there are a few things that you can do yourself to try and alleviate the symptoms of anxiety.

Dealing with anxiety at the workplace

Anxiety by itself can drain you out completely, and when it comes to your workplace, you may experience the worst of it.

What does anxiety do to your brain?

Two parts of the brain, namely the amygdala and the hippocampus are involved in processing anxiety.

The amygdala alerts the rest of the brain and triggers an anxiety response in case of some danger, while the hippocampus stores such threatening events as memories.

The feeling of anxiety is part of your body's stress response.

Your fight or flight response is triggered, and your system is flooded with norepinephrine and cortisol.

It is also accompanied by physical symptoms like an increase in heart rate and perspiration.

Such responses are designed to give you a boost to perception, reflexes, and speed in dangerous situations.

However chronic stress may end up being detrimental to the brain.

"A recent study has shown that chronic stress could cause a structural degeneration of the prefrontal cortex and hippocampus thereby inhibiting the brain’s control over stress response.

How can you differentiate between an anxiety attack and a panic attack?

Though both anxiety and panic attacks share a lot of common ground, they are in fact not one and the same.

Panic attack, on the other hand, is an abrupt onset of intense fear and almost every time occurs out of the blue.

An individual facing a panic attack is often seized with terror and apprehension.

The common treatment options for both include therapy, prescribed medications, and self-help strategies.

Can anxiety kill you?

The symptoms of anxiety, like shortness of breath, tingling sensations, and chest pain, can have rattling effects on your brain.

As debilitating and scary as the symptoms might be, anxiety by itself cannot kill you.

Heart palpitations during an anxiety attack may make you suspect a heart attack, but such symptoms usually pass after some time.

Although anxiety cannot kill you, chronic anxiety and stress can lead to other health issues like hypertension, heart diseases, and the weakening of the immune system.

So in order to prevent such anxiety-related illnesses, it is very important to seek professional help and keep the symptoms at bay.

Can anxiety give you cancer?

Cancer risk is complex and involves many factors like our genes, environment, and lifestyle.

While anxiety and depression may be symptoms of underlying medical conditions like brain tumors (especially in the older age), they do not give rise to cancerous conditions.

However, the development of cancer could be a reflection of another confounding factor like a poor diet or poor physical health (due to anxiety).

These, in turn, could be potential risks for cancer.

Regardless of the link to cancer, anxiety is a serious illness, and enough attention should be paid to manage it.

How does anxiety affect your sleep?

People with anxiety disorders are generally prone to sleep issues.

Troublesome thoughts and fears tend to keep them awake at night. This sleep deprivation can be linked to conditions like:-

What are the drugs that induce anxiety?

If a drug (either taking it or stopping it) induces anxiety symptoms, it is called substance-induced anxiety disorder.

But if your pre-existing anxiety condition is just exacerbated by the drug, it does not fall under substance-induced anxiety.

Medications can cause different reactions in different people. Some medications target the same part of the brain that plays a role in anxiety symptoms. These include:-

While some studies link the usage of oral contraceptive pills (OCP) to anxiety, not every woman who consumes it faces anxiety symptoms.

The hormonal changes brought about by the OCPs act as a strong trigger for anxiety.

The synthetic hormones present in OCPs are said to promote more binding of sex and thyroid hormones, thereby lowering their levels in circulation.

This can induce hypothyroidism, weight gain, and depression.

"OCPs are also known to deplete vitamins, minerals, and antioxidants which may again trigger the symptoms of anxiety

Other conditions caused by anxiety disorder

Tachycardia, an increase in the rate of heartbeat (response to anxiety), in serious cases can interfere with the normal functioning of the heart and make you more susceptible to sudden cardiac arrests

What medications can you use to treat anxiety disorder?

The first level of treatment for anxiety is therapy.

It is not advisable to take over-the-counter prescribed medications for anxiety.

It is always important to consult with a medical practitioner before starting a course of anti-anxiety medicines.

Such medications come under 4 primary classes:-

Vitamins and how they help with anxiety

Minerals like calcium and magnesium help to nourish the nervous system and prevent anxiety, panic attacks, and restlessness, or irritability.

Can you inherit anxiety?

Anxiety can be influenced by environmental factors as well as genetic factors.

When it comes to the heritability of anxiety, science is still hazy on that.

Even though a person whose parents have anxiety disorder doesn’t inherit it, he/she is definitely at a greater odds of developing it in the future.

Here is where we can bring in the term “genetic predisposition”.

It basically describes the increased likelihood of someone developing a condition, based on their genetic makeup.

So in other words, that person becomes genetically susceptible to developing anxiety.

Even if the disorder itself is not passed down, the particular set of inherited genes may play a role in the predisposition of anxiety.

There are several genes that contribute directly or indirectly to the body’s response to stress.

How can I use my DNA raw data to know more about my predisposition to anxiety?

The Xcode Life Gene Health report does not help with the treatment directly but provides you with insights on how to hack your genes to understand a little more about how anxiety affects your body.

You can upload your DNA raw data from 23andMe, Ancestry DNA, Family Tree DNA, etc. to get information about the genetic variants of anxiety that you carry.

How do you help a child with anxiety?

A lot of children with anxiety go undiagnosed because they don’t present with the obvious symptoms as adults do.

Even a child struggling in a particular subject might be indicative of anxiety. The signs that you should look out for include:-

Before putting children on anti-anxiety medications, therapies can be considered after consultation with a medical practitioner.

It puts children in a “safe environment” and exposes them to anxiety triggers in increments.

The purpose of this is to make them accustomed to the triggers and normally respond to them.

Exposure therapy also works in the same way but digs deeper into the roots.

The way to a healthy mind is through a proper diet. Here are some food suggestions that may provide some relief from anxiety.

It is also important to avoid certain food items like:-

Without the fiber, the body absorbs too much sugar from the juice

Is separation anxiety prevalent in adults?

Separation anxiety is the fear of being separated from a particular person or sometimes even a pet.

Although separation anxiety is mostly associated with kids and children, it is common among adults too.

The dynamics of establishing a “permanent cure” for anxiety is more complex than it may seem.

Even though medications are available to treat the symptoms of anxiety, they don’t reverse the disorder itself.

The many forms of anxiety disorders can be well-tackled using therapies and medications, but none promise a cure for these conditions.

The nature of anxiety by itself is chronic and recurring.

Herbal supplements or other treatments may help to put a temporary fuse on it and might make you feel that you are anxiety-free.

But these just work around the symptoms and do not deal with the underlying issue.

While we’re on this, it is also important to know that you do not need to reverse your anxiety disorder totally to lead a normal, happy life.

As long as you learn to manage the symptoms and gain control over your anxiety, you’ll be good to go.

Except for a few extreme cases, anxiety is not something that should be eradicated from our system completely.

The fight-or-flight response triggered by anxiety keeps us on our toes and boosts our reflexes, enabling us to face threats in a better way.

A little bit of anxiety can be considered as a survival mechanism that helps us get through stressful situations.