The DNA Blog » DNA and nutrition » Hate brussel sprouts? Your taste receptor genes may have the answer

Hate brussel sprouts? Your taste receptor genes may have the answer

Why can’t some people stand Brussel sprouts and some find it delectable?

We find many tastes inherently appealing across a broad segment of population (eg. sugar). Some tastes are acquired from cultural exposures. Yet, there are some tastes we cannot stand. Genes help us understand some of these strong inherent tastes and distastes that we have. Aversion to brussel sprouts is one of them.

So, is taste preference genetic?

There is clearly a genetic and an environmental aspect to taste preference. Which aspect dominates for what tastes is a subject of scientific research.
How do we taste?Taste is perceived by the taste receptors that are present on the surface of the tongue. Without these receptors, one will not be able to taste food, just as a color blind person is unable to see colors in objects. The type and number of these receptors are “biologically” programmed at birth. Some people have more and some less receptors. People also differ in the type and number of receptors they carry for various tastes.When we eat food, it mixes with saliva and comes in contact with the taste receptors. Taste receptors are connected to the brain through nerves. “Tasting” food is a process that involves the taste receptor on the tongue and the brain. The receptor sends a signal to the brain which then recognizes the taste. The brain recognizes that one has tasted one of the five basic tastes: sweet, sour, salt, bitter, salty, and umami. However, if you lack a specific version of a gene that produces a specific taste receptor, your ability to recognize that taste is reduced or absent.

Interesting story behind the “PTC gene”A chemist named Arthur Fox was working with phenylthiocarbamide (PTC) in the lab. His colleague complained about a horrible smelling odor, while Fox couldn’t smell anything! This is when Fox set out to discover why some people could smell and taste PTC while others could not. This incident allowed Fox to connect the dots between people’s genetic material and their ability to sense PTC. 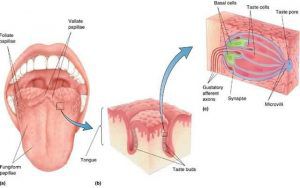 Later the gene for the PTC taste receptor, TAS2R38, was identified in 2003. Although TAS2R38 gene is a critical determinant of whether a person can or cannot taste PTC, other genes and environmental factors such as age, smoking, food/ drink patterns also come into play.There is an evolutionary significance that could be attributed to the sense of taste. Plants initially evolved the ability to produce these toxins to prevent themselves from being eaten. Likewise, humans as well as other animals evolved the ability to avoid these toxins through bitter taste to avoid becoming sick or being killed.

Being able to taste bitterness enables a person to either completely avoid these plants or at least moderate how much is being consumed. So this suggests that people who have maximal perception of bitterness had the evolutionary advantage (by avoiding toxins) over those who have minimal perception. However, not all toxins are bad for everyone. Some toxins only act on some species while benefiting others. So the ability to consume bitter tasting food which is non-toxic but has nutritional and medicinal value was useful during human evolution.

Want to know if you have the “the brussel sprouts gene” Xcode’s nutrigenetics test can tell you what versions of the TAS2R38 gene you have in your DNA. You can also learn about how your genes may influence other traits, including your risk for certain diseases.  You can write to us at hello@xcode.life

May 29, 2021
Clarified my allergies
Didn't expect much but this proved me wrong. I discovered useful personal traits and information about my health that I customized towards my day to day living. For the longest time, I thought I was lactose intolerant and allergic to cockroaches, but this report showed me that I wasn't. I thought the milk from the bubble tea I drank every weekend was causing my constant bloating. Truthfully, I didn't drink enough water and was snacking a lot. Thank you, this has been life-changing.
Katy Strong

September 15, 2022
So pleased I ordered the Methylation Report.
I’m so glad I confirmed once and for all about my MTHFR status. I had a raft of tests done last year by a practitioner which certainly pointed to under-methylation, including slightly elevated homocysteine, and other signs and symptoms, but the genetic testing they offered was extortionate. After completing my AncestryDNA I was able to upload my raw data file with Xcode Life at a very reasonable $20 and receive a report that was very easy to understand and which included details on some 42 gene SNPs in my profile relating specifically to methylation. My current health issues are moderate, not critical but I now have a concrete plan on how to go about lowering my homocysteine and checking it’s status every year as guide for health. Given my mother and both maternal grandparents had significant cardiac issues, this feels very prudent. I would definitely recommend Xcode Life as an economical option for unravelling one’s genetic markers.
Scarlato Barros

March 30, 2021
Very helpful and quick response time
Definitely worth the money! I had recently did the 23andMe testing and I've always been more curious on my MTHFR mutations, as it can be tied to many health issues. I came across Xcode Life where I could upload the raw data from 23andMe (which was very easy by the way) and get additional info. While I was doing it I decided to also get the Covid related test out of curiosity. I got the results the same day. I even had some questions and their customer service is on point. Extremely helpful and quick response time.
Allie Casares