The “Vegetarian gene” and what you need to know about it

Are fats good or bad? Which types of fats are good and which types are bad? And how much fat is bad and how much is good? Is fat bad for everyone or only for some or for some more so than others?

These are among the many confusing questions that we encounter everyday. And one can find a variety of confusing information on the internet, from diet plans which recommend overloading on fats to fat avoidance.

For decades, nutritionists and doctors have preached that a low-fat diet is the key to maintaining optimal weight and preventing health problems. But in recent times, research has shown that a diet rich in healthy fats can be better for people, particularly if those fats are used to offset the consumption of foods containing high levels of salt, sugar and refined carbs. Recent U.S dietary guidelines (2015) no longer focus on the restriction of fat in the diet, instead emphasizing the quality of fat

One of the key features that distinguishes humans from other primates is the larger brain size, and a relatively large portion of the our  daily energy intake is consumed in the brain. This could have necessitated humans to consume foods with high energy density such as fats, especially long chain polyunsaturated fatty acids, in order to meet the high energy demands of the larger brains. The same could be attributed to our enhanced ability to prefer, detect, digest and metabolise high fat foods, and larger amounts of animal foods compared to other primates. Evidence indicates that the human evolution took place on an omega 3 rich diet found in East- African land-water ecosystems which made it easy to get iodine, vitamin A and omega 3 rich foods both from plants and fish necessary for brain functions. When humans migrated out of Africa, new evolutionary adaptations developed to enable survival in various environments with diverse food sources.

The dietary fats have undergone tremendous changes in terms of quantity and quality over the past 10,000 years. Some of the notable changes in the modern day diet in terms of dietary fat quality are the increased intake of saturated fatty acids, linoleic acid (LA) derived from omega 6 fatty acids and industrially produced trans fatty acids and reduced intakes of omega 3 fatty acids, dominance of more arachidonic acid, derived from LA in the diet. These changes are thought to have a broad impact on one’s health including chronic low grade inflammation leading to metabolic syndrome and its sequelae. 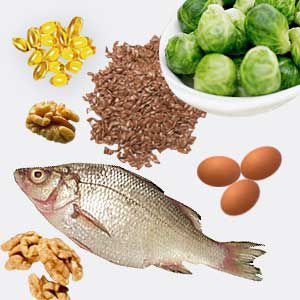 Long chain polyunsaturated fatty acids (LCPUFAs), arachidonic acid (AA), eicosapentaenoic acid (EPA) and docosahexaenoic acid (DHA) provides structure for cells, act as messengers between and within cells, and play a major role in lipid and sugar balance in the body. Our body converts all the shorter length polyunsaturated fatty acids (SCPUFAs) to LCPUFAs by using FADS (fatty acid desaturase) enzyme, produced by the FADS genes such as FADS1 and FADS2.

Plant based fats such as those from foods like vegetable oils, seeds and nuts, are SCPUFAs, the shorter length fatty acids such as alpha linolenic acid (omega 3) and linolenic acid ( omega 6) and need to be converted to LCPUFAs such as EPA, DHA and AA respectively in order to be utilized by our body, whereas animal  based fats such as fish, eggs or steak already contains longer length LCPUFAs and our body can readily utilise them without the need for conversion.There are different types of FADS1 gene and the type you carry determines how well the SCPUFAs are converted to LCPUFAs. People carrying the “C” type of this gene have reduced conversion ability, and such people need to get their PUFA from animal sources especially fish or from supplements. Whereas people carrying the “T” type of this gene have efficient conversion ability and they need not rely on animal sources of PUFA to meet their  needs.

A recent study done at the Cornell University compared 234 individuals of a primarily vegetarian Indian population and 311 individuals of traditional meat eating American population. Using 1000 genomes project, the study provided evidence that people with long ancestry of plant based diet have developed a mutation in the FADS2 gene, that has helped them convert SCPUFAs to LCPUFAs, hence fulfill their Omega-3 requirements from plant based sources. The study also points out people with FADS2 “vegetarian-gene” type are at higher risk of cardiac disease and cancer when they switch to a non-vegetarian diet.

Credit: Kaixiong Ye, Cornell University/Map from www.outline-world-map.com The graph shows the global frequency pattern of an allele adaptive to vegetarian diets. The allele has the highest frequency in Indians, who have traditionally relied heavily on plant-based diets.

Thus, prescribing personalized diets based on the type of FADS genes – insertion type or the deletion type can be an important consideration for precision nutrition and medicine.

Want to know if you have the “the vegetarian gene” Xcode’s nutrigenetics test can tell you what versions of the FADS1 gene you have in your DNA. You can also learn about how your genes may influence other traits, including your risk for certain diseases.  You can write to us at hello@xcode.life