The DNA Blog » Genes and Allergy » Seasonal Allergy » How Does Genetics Influence Your Risk For Hay Fever?

How Does Genetics Influence Your Risk For Hay Fever? 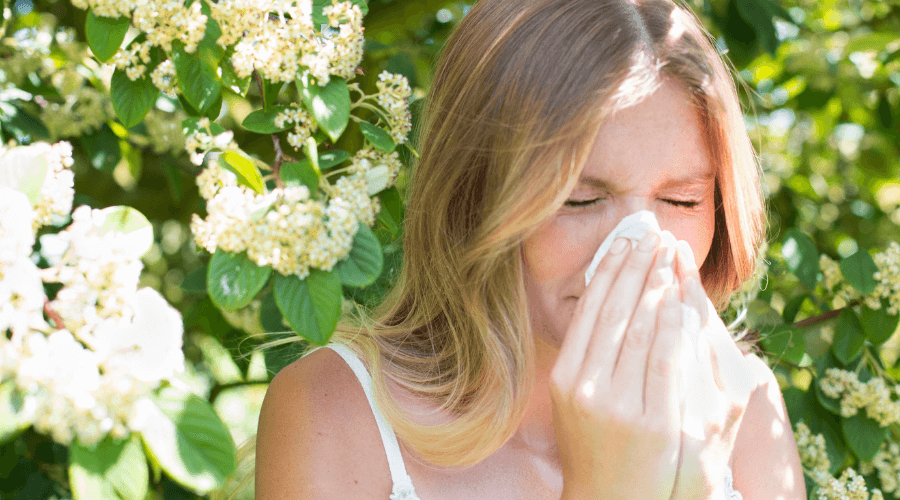 What is Hay Fever?

Hay fever does not cause any fever or have anything to do with hay, as the name suggests. Hay fever, also called allergic rhinitis or nasal allergies, is an allergic response to certain allergens like pollen, dust mites, or pet dander. Allergic rhinitis occurs when the immune system responds to something foreign in the environment and mounts a defense causing cold-like systems. It mainly affects the nose.

According to the Centre for Disease Control and Prevention, 7.7% of the adult population and 7.2% of children are affected by hay fever.

The symptoms can occur with a change in seasons or even throughout the year, depending on the trigger allergen. Seasonal rhinitis usually occurs in response to outdoor allergens like pollen, especially in spring and fall. Pollen is the most common allergen that causes seasonal allergic rhinitis. Perennial rhinitis occurs at any time during the year or all year round in response to allergens like pet dander.

Irritants like cigarette smoke, perfumes, and other strong odors can also cause hay fever. These irritants cause nonallergic rhinitis that is similar to allergic rhinitis except for the trigger of symptoms.

Allergic rhinitis is not life-threatening but can interfere with your daily life and make you feel uncomfortable. Finding the right trigger and subsequent treatment are important to manage this condition.

The Genetics Behind Hay Fever

The TSLP gene encodes a protein called thymic stromal lymphopoietin, which is a cytokine. Cytokines are a category of proteins involved in immune cell signaling.

The HLA-DQB1 gene is part of the family of genes that form the human leukocyte antigen (HLA) complex. The proteins produced by these genes play an important role in the immune system of the body. They help in distinguishing between self and foreign proteins and trigger the necessary immune response.

Variations in this gene are found to be associated with asthma and allergic rhinitis.

Skin-prick test: A small amount of allergen is pricked into the skin of your arm or upper back. If a bump or hive is seen at the site of the prick after about 20 minutes, it could mean that you’re allergic to that particular material. The allergen is also sometimes inserted under the skin in an intradermal skin-prick test, which is more sensitive.

Self-care: The best way to avoid symptoms is to avoid exposure to allergens. If you’re experiencing symptoms, try to trace back your activities and find the cause of the symptoms.
- Try to stay indoors as much as possible to avoid increased exposure to pollen, especially in the spring and fall seasons when pollen counts are maximum.
- Keep your house clean and free of dust mites. Clean the air conditioner vents frequently as they accumulate a lot of dust.
- Wash your bedding frequently and use mite-proof covers if necessary.
- If you’re allergic to pet dander, try to keep the pet outside your room as much as possible to avoid exposure to allergens.
- Avoid using carpeted floors at home as they tend to accumulate a lot of dust and dander.
- Acupuncture, honey, certain probiotics, and nasal saline injection are certain home remedies that can help in treating allergies.

Medication: Many allergens aren’t airborne and cannot be easily avoided. Certain medications or treatment can help manage symptoms. Consult a doctor before starting any new medication or treatment.
- Antihistamines are used to treat allergies. Various OTC antihistamines like cetirizine, fexofenadine are available.
- Decongestants are usually used for a short period to relieve a blocked nose and other sinus-related symptoms.
- Eye drops and nasal sprays are also used for a short period to treat red eyes and other allergy-related symptoms. Steroid nasal sprays are used long-term to treat severe allergies.
- Corticosteroids are used to help with inflammation and immune response. They are usually used in nasal sprays.
- Immunotherapy or allergy shots are usually recommended by the doctor for severe allergies.

May 29, 2021
Clarified my allergies
Didn't expect much but this proved me wrong. I discovered useful personal traits and information about my health that I customized towards my day to day living. For the longest time, I thought I was lactose intolerant and allergic to cockroaches, but this report showed me that I wasn't. I thought the milk from the bubble tea I drank every weekend was causing my constant bloating. Truthfully, I didn't drink enough water and was snacking a lot. Thank you, this has been life-changing.
Michelle Casterline