The DNA Blog » Genes and PGx » Personalized Medicine: What You Can Learn From Xcode Life's Reports

Personalized Medicine: What You Can Learn From Xcode Life's Reports 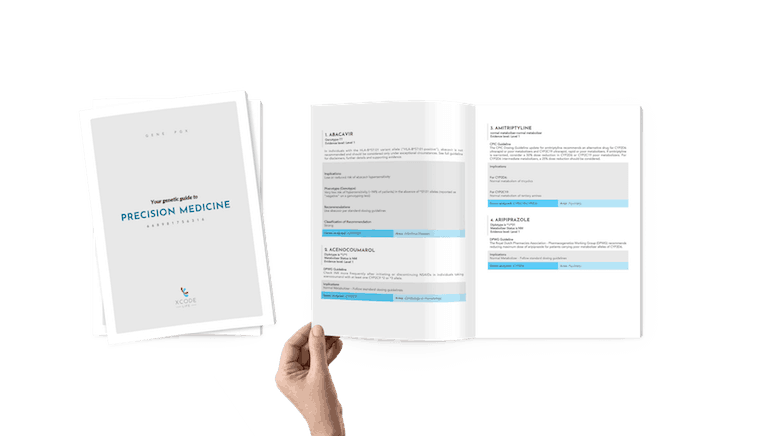 Xcode Life’s Personalized Medicine report targets genes that are associated with your response to drug therapies. This will help your physician understand your metabolic responses and prescribe the right drug.

Your genes produce drug-metabolizing enzymes, drug targets, and other proteins related to the action of drugs.  Each individual has a unique genetic makeup. Hence, they might respond differently to certain medications.

Pharmacogenomic tests provide information about a person’s genetic makeup to help the physician decide which medications and what doses might work best for him or her. It also helps to reduce the cost and time associated with a trial-and-error approach to treatment.

Some interesting facts about genes and your medications:

The results of this report can be used as a supplement to the clinical decision-making process and reduce the cost and time associated with a trial-and-error treatment. In this report, we profile gene variants that influence your metabolic response to various drug therapies.

Your results, along with the possible outcome, are mentioned. The numbers in your result column signify which variant allele you carry and how that influences the metabolism of the drug. For example, *1/*1 is used to denote a normal metabolizer. This will help you understand your genetic type for each drug.

This section walks you through the list of drugs we test you for.

The drugs are classified into various categories that include:

Depending on the gene type you carry, your metabolizer status is assigned for each drug. Normal or extensive metabolizers break down drugs at a normal rate. These people are likely to metabolize the drugs normally and experience the intended effect of the drug.

Poor metabolizers break down the drugs at a much slower than normal rate. The standard doses may not be as effective for them. They also may experience undesired side effects.

Ultra-rapid metabolizers break down drugs at a faster than normal rate. As a result, they may experience some undesirable side effects. They may also require a higher dosage of the drug.

The evidence level and strength are also mentioned, along with the gene analyzed in relation to drug metabolism. Treatment and dosage recommendations are provided for each drug covered in the report.

What are the traits covered in this report?