The DNA Blog » Genes and Skin » How Genes Influence Your Risk for Lentigines?

How Genes Influence Your Risk for Lentigines? 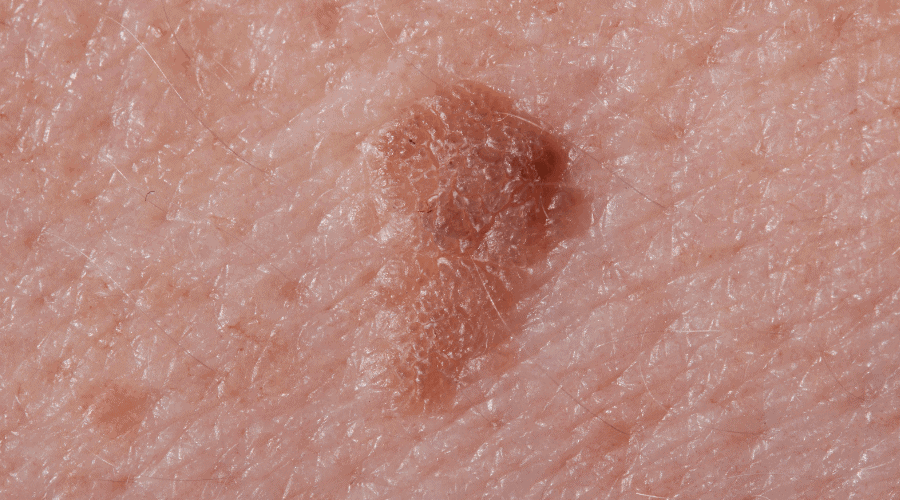 A lentigo (plural: lentigines) is an area of the skin that is flat or slightly raised and pigmented, usually tan, brown, or black. Lentigines are mostly seen in areas of the body that are exposed to the sun frequently. They are irregular in shape and vary in size.
They are more commonly seen in the middle age and older population, and the number of spots tends to increase with age. They appear suddenly or grow in size over the years.
Lighter-skinned people have a higher chance of getting these sunspots. Increased exposure to the sun, multiple sunburns, phototherapy, and radiation therapy can increase your risk for lentigines.

Based on where the lentigines appear on your body and their cause, the different types of lentigos are
1. Lentigo simplex - the most common type found on your arms, legs, and trunk. They are often seen from childhood and can fade away with time.
2. Solar lentigo - mostly seen in people older than 40 years. The UV radiation in the sun rays causes this pigmentation to occur as spots on sun-exposed areas. These are also called age spots.
3. Inkspot lentigo - seen in lighter-skinned people who have sunburns
4. PUVA lentigo - seen after PUVA (psoralen and ultraviolet A radiation) therapy used to treat psoriasis and eczema
5. Radiation lentigo - seen in places exposed to radiation therapy, usually in cancer treatment

Sunspots are not itchy and do not have any other symptoms. They just appear on your skin on exposure to UV radiation. They are usually not a cause for medical concern unless they are triggered by an underlying syndrome.

Certain inherited syndromes are associated with lentigines and can increase your risk of getting them. These include:
Cowden syndrome
Noonan syndrome
Peutz-Jeghers syndrome
Xeroderma pigmentosum
Bannayan-Riley-Ruvalcaba syndrome

The geographical location is the link between evolution and lentigines. There appears to be an evolutionary purpose of freckles in humans. People who lived in places with higher sun exposure had a darker skin color. This is due to the excess production of melanin, which protects the skin from the harmful effects of ultraviolet radiation (UVR). Lighter-skinned people often have ancestry that evolved with less exposure to sunlight. When these people are exposed to more sunlight than usual, pigmentations like sunspots occur.

How Genes Influence the Development of Lentigines?

This gene contains instructions for the production of melanocortin-1 receptor. This receptor is activated by the Melanocyte Stimulating Hormone (MSH), one of the two hormones that regulate pigmentation. This receptor is mainly found on the surface of melanocytes, cells that are involved in melanin production. They are also found in certain immune cells of the body.

Variations in this gene are associated with differences in hair and skin color. Several SNPs associated with the MC1R gene are primarily linked to fair skin, red or light hair, and freckles.

rs2228479
rs2228479, also called Val92Met or V92M, is an SNP found in the MCR1 gene. The A allele of this SNP is associated with a higher risk of developing sunspots.
It is also associated with an increased risk of sunburns and red hair.

The IRF4 gene contains instructions for the production of interferon regulatory factor 4. These proteins are mainly involved in the body’s response to infection by viruses.
This gene is also found to be strongly associated with pigmentation, sensitivity to sun exposure, freckles, blue eyes, and brown hair color.

Indoor tanning
Tanning beds also increase your exposure to UV light and can influence the appearance of sunspots.

Phototherapy
Phototherapies like PUVA (psoralen and ultraviolet A) treatment used to treat eczema and psoriasis can lead to the appearance of PUVA lentigines.

Lentigines are typically not harmful and are not a cause for medical concern. They do not have to be treated, but you can follow certain measures to lighten them.
Cryotherapy: Liquid nitrogen or nitrous oxide solution is used to freeze the sunspots. It only takes a few minutes.
Chemical peels: These can be a little painful and cause a burning sensation on your skin. This involves applying an acid solution on the sunspots that turns into a wound that peels off.
Laser resurfacing: A laser beam is used to remove the layers of skin under the sunspot. The area is allowed to heal for about 10-20 days, and new skin grows.
Intense Pulse Light (IPL): Pulses of light energy target the melanin and destroy it by heating, which results in the removal of the colored spots. This takes only about 30 minutes and causes very little to no pain.
Sunscreen: Sunscreen of SPF 50 or above can help prevent sun spots by protecting your skin from exposure to UV rays.
OTC products: Bleaching creams that contain hydroquinone or retinoids can be used to lighten the sunspots
Home remedies: Aloe vera, licorice extract, apple cider vinegar, green tea bags, lemon juice, milk, or honey can be used on the skin to lighten the sunspots.