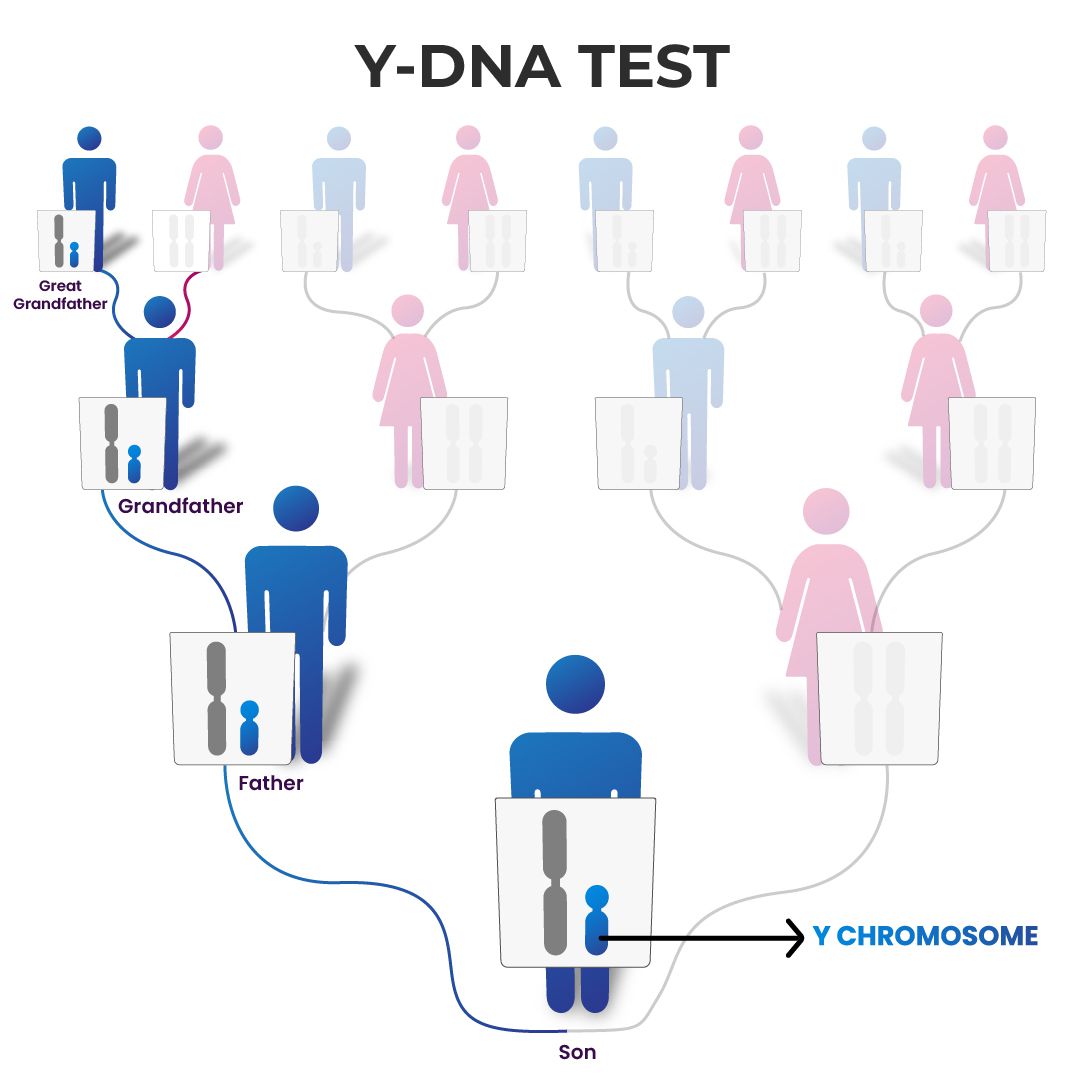 DNA tests have a significant role in forensics for many unsolved legal cases.

Autosomal DNA tests are popular for determining parent/child relationships with a high level of accuracy. It looks at maternal and paternal data.

On the other hand, Y DNA tests look at only paternal data, which is helpful in genealogical research.

Already Taken A DNA Ancestry Test? Get 3000+ Insights From Your Raw Data.

What Is Y DNA?

Humans carry 23 pairs of chromosomes in each cell; 22 pairs are autosomes, and one pair is an allosome.

Y DNA is one of the male sex chromosomes inherited from the father and another chromosome (X) from the mother.

Y DNA is inherited only from the biological father.

Y DNA possesses the SRY gene that produces the protein sex-determining region of the Y-chromosome.

This protein is involved in male-typical sex development.

The structure of the Y chromosome is a block of non-recombining DNA (heterozygous state) transmitted solely through males.

It will be the same for grandfathers, great-grandfathers, and forefathers of ancestry if the paternal lineage is unbroken with a female child.

Mutations in the Y DNA occur rarely, and consistent inheritance is helpful in chromosome DNA testing.

Y DNA is the major sex-determining chromosome in people assigned male at birth.

It is responsible for the development of the male reproductive system.

Y DNA is vital to trace the paternal lineage back hundreds or even thousands of years of ancestry (family tree).

Y DNA is a genealogical DNA, inherited unchanged from father to son, which will determine the direct father-line ancestry.

Y DNA is effective in archaeology, which shows the human occupation of the Americas before the development of the Clovis lithic culture.

Evidence from the Y chromosome points to the advent of humans in the Americas between 10 to 20,000 years ago.

Y DNA is a non-recombining DNA and has a low mutation rate, making it easy to find the common ancestor with your paternal line.

There are two kinds of Y-DNA tests, the Y-DNA STR test and the Y-DNA SNP test, which have different purposes in DNA testing.

In Y-DNA STR tests, STR makers on the Y chromosome measure the number of times the DNA sequences are repeated.

Though Y-DNA STR tests are variable and mutative, it establishes the timeframe when two men share a common paternal ancestor.

Unlike Y-DNA STR markers, Y-DNA SNP markers are stable over many generations.

Single Nucleotide Polymorphism (SNP) is a genetic change that occurs at a single specific position in the genome.

An SNP mutation is carried indefinitely by descendants of the individual in whom the SNP had formed – the SNP Progenitor.

Y-DNA SNP tests detect the mutations/ variations and distinguish one genetic lineage from the other.

SNP testing, such as the Big Y-700 test, gives information on haplotree (genetic family tree) and time to the most recent common ancestor (TMRCA).

Y DNA tests can be taken at home like many other DNA tests.

Who Can Take It?

Only males can take the Y DNA test for insights about their biological father’s lineage.

The best way to choose the right test taker is to pick the person from a family tree with only sons and no daughters.

The man descending from that ancestor would have inherited the Y chromosome DNA through several generations.

Here are some possible results and interpretations you can expect from the Y DNA test.

Recently related means a time frame of about 1000 years or 40 generations.

If females wish to take the Y DNA test, they can opt for their brother, father, paternal uncle, or paternal grandfather as test takers.

Which Y DNA Test Should You Take?

A Y-DNA STR test is ideal for establishing whether alleged male relatives are biologically related.

The Big Y-700 test is most useful when you have traditional Y DNA testing with good match scores going back at least eight generations.

May 30, 2021
Finding out random genetic variations
Finding out random genetic variations you might be predisposed to. It gives out likely or unlikely expressions you might have. I got the health, fitness and nutritional pack and I saw confirmations of experiences that I've uncovered about myself, like having unordinary grip strength. It's neat to have this kind of validation and proof! I plan to reference my xcode pdfs since there's a lot to digest! I find the vitamins my body would likely prefer to be my favorite part of it. I want something more definitive to understand myself, like not what's "likely", but genes are complicated and xcode just provides what's likely and that's ok. What I would prefer is probably a whole other complex science. It was worth it.
Scarlato Barros

March 30, 2021
Very helpful and quick response time
Definitely worth the money! I had recently did the 23andMe testing and I've always been more curious on my MTHFR mutations, as it can be tied to many health issues. I came across Xcode Life where I could upload the raw data from 23andMe (which was very easy by the way) and get additional info. While I was doing it I decided to also get the Covid related test out of curiosity. I got the results the same day. I even had some questions and their customer service is on point. Extremely helpful and quick response time.
Jaclyn Galvin