The DNA Blog » Genes and Nutrition » Gluten Sensitivity: How Genes Influence Your Sensitivity To Gluten 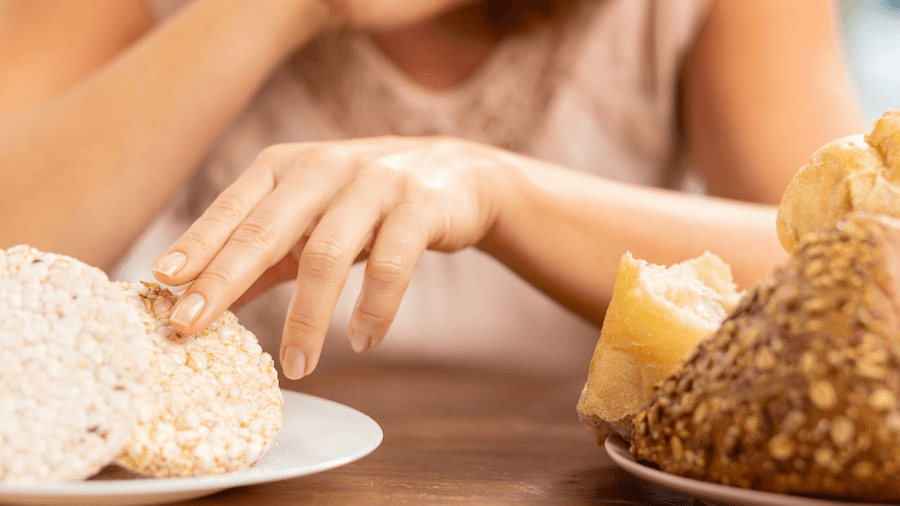 Gluten is a family of storage proteins found in various grains such as barley, rye, and wheat. Gluten is responsible for the soft and chewy texture of pastries and baked items. It also retains the moisture in bread, pasta, and cereal.

Gluten intolerance and gluten sensitivity are two terms used interchangeably to describe a condition where the body recognizes gluten as an ‘enemy’ and initiates an immune response against it.

Knowing The Difference Between Gluten Intolerance And Celiac Disease

Celiac disease is an exaggerated form of gluten intolerance. Upon consuming gluten, the immune system attacks the lining of the intestines. When the symptoms are more severe, the recovery is a lot harder.

Here, the body’s immune system, which is meant to protect it, mistakenly acts against it. This is known as an auto-immune response, which can be due to genetic reasons.

Since intestines play a big role in the absorption of essential nutrients, attacks on them over time can result in poor absorption of nutrients, putting you at risk for various deficiencies. When the gluten intolerance is non-celiac, the immune responses triggered do not damage the intestines but instead contribute to milder symptoms.

Gluten sensitivity symptoms are not restricted to just the digestive system.

What are the symptoms of gluten sensitivity?

All the fad about gluten-free diets has portrayed gluten-containing products, mainly wheat, in a bad light. While gluten is a big no-no for the gluten-sensitive, reduced consumption of whole grains may negatively impact your health.

Whole grains like wheat, bran, and rye are rich sources of fiber. They also contain carbohydrates, proteins, and small amounts of B vitamins and minerals.

Thus, avoiding gluten in the absence of an intolerance/sensitivity can end up being detrimental to your health.

Evolutionary Significance: How did our ancestors respond to gluten sensitivity?

Diana Gitig, a Ph. D. graduate from Cornell University, Massachusetts, mentions that celiac disease's first reported case dates back to 100 A.D. It was diagnosed by a Greek doctor, Aretaeus. Yet, the cause of the disease was never understood clearly.

During the Dutch famine in the 1940s, when celiac patients received very little flour (wheat) for consumption, their symptoms started improving.

When fresh supplies of bread were reintroduced, the symptoms started worsening again. This was when wheat was isolated as the cause of the intestinal symptoms.

Prof. David Sanders from the University of Sheffield takes help from the concept of evolution to answer this huge rise in cases. He claims that humans started eating wheat only recently, about 10,000 years ago. This is a very brief period considering that humans have walked on the planet for more than 2 million years.

Humans initially consumed raw food, such as plants, fruits, and meat. Processed food (wheat, rye, and other grains), are relatively new in the evolutionary timeline. Prof. David acknowledges this fact and states that our body is still in the process of adapting, especially the food that contains gluten in it. With millions of years of having a gluten-free diet, it makes sense as to why gluten is considered a foreign body by our immune system.

It is also worth mentioning that gender studies showed that both men and women had equal chances of being gluten-sensitive. Hence it can be inferred that gender does not play a role in this intolerance.

The Human Leukocyte Antigen (HLA) gene system plays a role in the production of the Major Histocompatibility Complex (MHC), which are proteins present on the cell surfaces. They play a role in regulating the immune system.

Two classes of the HLA gene known as HLA-DQ2 (HLA-DQ2.2 and HLA-DQ2.5) and HLA-DQ8 are linked with gluten intolerance risk.

In a study conducted to assess the genetic influence on gluten intolerance, nearly all the patients with celiac disease had the risk allele in the HLA DQ2 and the HLA DQ8 genes. The absence of the same was found in 100% of people without celiac disease. In another study conducted to analyze the HLA gene types, people with the C allele in HLA DQ8, T allele in HLA DQ 2.5, the T, C and A alleles in different subtypes of HLA DQ 2.2 (M1, M2, and M3 respectively), and A allele in HLA DQ7 were shown to have an increased risk of reacting to gluten in their diets.

Some of the non-genetic causes of gluten sensitivity are:

Not all people are born with gluten sensitivity. It is possible to acquire it during the course of life. This intolerance can be triggered after surgery, childbirth, or after a period of severe stress.

Gluten sensitivity increases the risk of an adrenal hormone imbalance.

Unstable sugar levels and inflammation of the digestive tract resulting from gluten intolerance cause the adrenal glands to secrete cortisol.

Gluten Sensitivity Can Cause Neurological Symptoms

Gluten can also cause other disorders like insomnia, migraines, ADHD, epilepsy, schizophrenia, bipolar disorder, and in a minute number of cases, gluten ataxia (antibodies directed at gluten attacks the brain).

Gluten Sensitivity Can Cause Mood Disorders

Many studies have shown a correlation between gluten intolerance and depression, anxiety, and other neurological syndromes.

A study conducted by Christine Zioudrou and her colleagues at the National Institute of Mental Health in 1979 found that some gluten compounds can attach to the morphine receptors in the brain.

The morphine that is produced in the body is known as endorphins. These are released in our body for various reasons, for instance, to reduce/manage pain.

Certain compounds of gluten (exorphins) mimic the structure of endorphins and attach to the receptors.

Thus, the endorphins have no place to attach to and are not activated. This can lead to mood-related disorders like depression and anxiety.

Gluten Sensitivity Can Cause Insomnia

A large majority of the people who suffer from gluten-intolerance report lack of sleep and poor sleep quality.

Due to digestive symptoms, neurological symptoms, and generalized fatigue and tiredness, most people suffer from a lack of sleep or other related conditions.

How To Know If You Are Gluten Sensitive

If you think you have some of the symptoms of gluten sensitivity, talk to your doctor before jumping to any conclusions. The doctor can run tests and review your history to help reach a diagnosis.

Another way to find out if you have a risk for gluten allergy is to do a genetic test. If you already have your DNA raw data from any ancestry company like 23andMe, Ancestry DNA, Family Tree DNA or whole genome data, you can upload it to Xcode Life for a Gene Nutrition report.

In the Gene Nutrition report you can find an in-depth analysis of your genetic variants for gluten sensitivity and ways to manage or prevent it.

A gluten-free diet seems pretty straightforward - just removing gluten from your diet. But completely avoiding gluten can be challenging as many ingredients added to food like soy sauce, mayonnaise, and roasted nuts also contain gluten.

Whole grains like wheat and barley are well-known harbourers of gluten. So wheat-based bread, pasta, or baked goods should be avoided.

What are the naturally gluten-free foods?

July 7, 2021
In-depth results
I was curious to see the health insights Xcode had to offer since the 23andme health reports were a bit lackluster. I ordered one health report from Xcode and received results within an hour. This specific report was more extensive than 23andme and came with a helpful guide. I definitely want to order more tests but the only issue is there’s so many to choose from.
Katy Strong

September 15, 2022
So pleased I ordered the Methylation Report.
I’m so glad I confirmed once and for all about my MTHFR status. I had a raft of tests done last year by a practitioner which certainly pointed to under-methylation, including slightly elevated homocysteine, and other signs and symptoms, but the genetic testing they offered was extortionate. After completing my AncestryDNA I was able to upload my raw data file with Xcode Life at a very reasonable $20 and receive a report that was very easy to understand and which included details on some 42 gene SNPs in my profile relating specifically to methylation. My current health issues are moderate, not critical but I now have a concrete plan on how to go about lowering my homocysteine and checking it’s status every year as guide for health. Given my mother and both maternal grandparents had significant cardiac issues, this feels very prudent. I would definitely recommend Xcode Life as an economical option for unravelling one’s genetic markers.
Samantha Jones

May 30, 2021
Finding out random genetic variations
Finding out random genetic variations you might be predisposed to. It gives out likely or unlikely expressions you might have. I got the health, fitness and nutritional pack and I saw confirmations of experiences that I've uncovered about myself, like having unordinary grip strength. It's neat to have this kind of validation and proof! I plan to reference my xcode pdfs since there's a lot to digest! I find the vitamins my body would likely prefer to be my favorite part of it. I want something more definitive to understand myself, like not what's "likely", but genes are complicated and xcode just provides what's likely and that's ok. What I would prefer is probably a whole other complex science. It was worth it.
Seb B

July 2, 2022
Go there, they are the best!!!
Wonderful place to get an analyze of your DNA. It can take some time, but the details you get are OUTSTANDING!! This is brilliant service. Great customer service as well. I love this place and can only recommend everyone to take this. Worth the wait, worth the result and gives you answers to your life. Do not hesitate, go here, let them analyze your DNA, top notch service!!!
Rebecca Burwell