How Genes Influence Your Risk For Lactose Intolerance 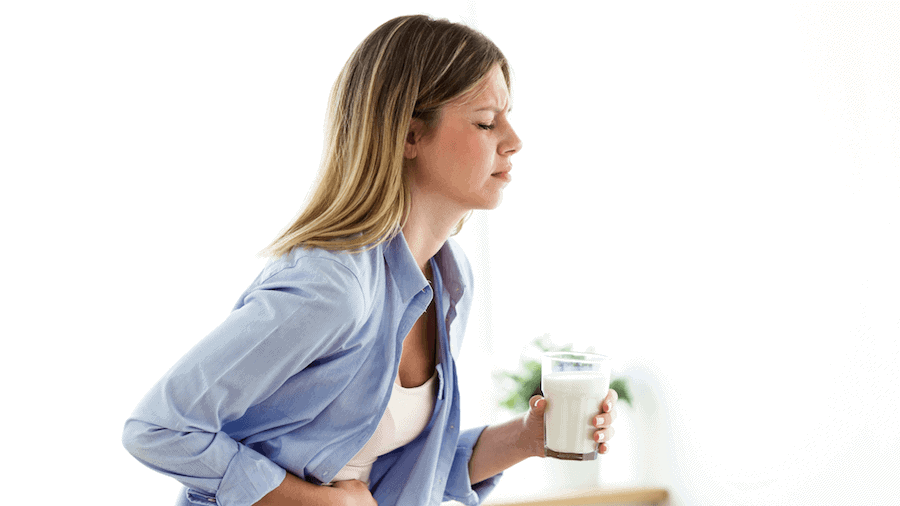 WATCH: How genes influence your risk for lactose intolerance

70% of the world is lactose intolerant- Are you?

Lactose is a healthy carbohydrate commonly available in milk and milk products. It has two simpler sugar units, namely glucose and galactose. Lactose improves the absorption of calcium, which is essential for your bone health. Additionally, lactose is the only source of galactose, a simple sugar that is necessary for good brain function and a healthy immune system.

Lactose intolerance occurs when lactose is not digested well by our digestive system, due to reduced or non-production of lactase enzymes.

When we say that the food is digested in our stomach, what we mean is that the food we ate is broken down into smaller pieces so that the body can absorb them. The smaller “pieces” not only mean the physical chewing of food, but also the chemical breaking of food by the enzymes in our body.

One such enzyme is lactase,which is responsible for breaking down lactose molecules. Any deficiency in this enzyme would prevent lactose from being digested, thereby causing lactose intolerance.

When lactose intolerant people consume dairy products, they’re usually faced with unpleasant gastrointestinal (stomach and intestines) symptoms. Some of the symptoms that occur immediately include:

How Did Humans Develop Lactose Intolerance?

Throughout the animal kingdom, only infants were are to digest lactose, and as they grow, their bodies slow down or stop producing lactase enzymes. In other words, all animals are lactose intolerant. Humans are the only exception to this.

Around 8,000 years ago in what's now Turkey — just when humans were starting to milk newly domesticated cows, goats, and sheep — changes in the gene responsible for producing lactase appeared more frequently. This is how adult lactose tolerance developed in humans. But of course, not the entire population was lactose tolerant, only a few individuals developed this beneficial mutation and as they produced children, they spread the lactose tolerant genes.

Yet, lactose tolerance continue to prevail. How?

An evolutionary geneticist, Mark Thomas, seems to think that it is the combination of famine and 'deadly diarrhea.' In times of famine, where the crops failed, the consumption of milk probably increased.

While it may just cause some gastrointestinal disturbances in the intolerant, it can be deadly for the malnourished.

So, the lactose tolerant individuals had a better survival advantage at this time and were more likely to pass on the gene that ensured the ability to consume dairy.

The Genetics of Lactose Intolerance

The LCT gene is responsible for producing the lactase enzyme, which degrades the lactose molecules. This LCT gene is controlled by another gene, the MCM6.

Located inside the long arm of chromosome 2, the MCM6 gene plays a governing role in our ability to digest milk products. A specific portion of the MCM6 gene - known as a regulatory element - helps control the activity (expression) of the LCT gene, thus influencing how much lactase is produced.

Also known as "C/T(-13910)" or just 13910T, rs4988235 is located in the MCM6 gene. However, it exerts its influence on the lactase-producing-LCT gene. The T allele of rs4988235 is the more common allele and enables the lactase enzyme production. So people who have the T allele are likely to be lactose persistent or lactose tolerant. The lactase activity is more in people with two T alleles than with one.

Use our free Gene Tool to check your MCM6 gene variants

Can You Be Lactose Tolerant and Suddenly Become Intolerant?

Answering this question also partially solves the mystery of why, for some, the genetic tests indicate lactose intolerance, despite them being able to consume dairy products without any issues.

Let’s take an example of a person who has been following a vegan lifestyle for a while. A vegan diet is dairy-free, hence no need for Lactase enzyme in the body. However, after a few years on a vegan diet, reintroducing dairy products in his/her diet is giving him/her digestive problems. So, what could have happened?

The cells that produce the enzyme to digest lactose (lactase) are present in the intestines and are few in number. When a person goes off-dairy for a while, there’s basically no work for these cells, and they temporarily disappear. When dairy is introduced back into the diet, the person may exhibit lactose intolerance for a while till these cells reappear.

Another factor that could explain this is our gut flora - the millions of bacteria present in our digestive tract. Some of these bacteria may help in breaking down lactose molecules. A diet that includes dairy products will offer a survival advantage to the bacteria that can digest lactose and will let them flourish better. On the other hand, these bacteria will not thrive for long when dairy is removed from the diet. When reintroducing dairy products, due to the lack of lactose-digesting-bacteria, the person may experience temporary lactose intolerance.

Gut bacteria is also the reason why many lactose-intolerant individuals can still consume up to a cup of milk per day.

If lactose-digesting bacteria dominate your gut flora, you may even be able to stick to a normal diet (that includes dairy) even if your gene does not produce lactase!

In fact, introducing some ‘good bacteria’ (with the ability to digest lactose) has been studied to improve and provide relief from lactose intolerance symptoms.

On the other end is North European descent LI has a 18-26% incidence. Their long-standing dependence on unfermented dairy products indicates that the European ancestors have depended on dairy farming and passed on the specific gene type that produces lactase.

Ethnicity also influences the age of onset of lactose intolerance.

Lactose intolerance in infancy is the most common in Finland - 1 in 60,000 newborns affected. In caucasians, intolerance develops in children older than five years. In African Americans, most children become intolerant by the age of two years.

A lactose-free diet is the best way to combat lactose intolerance. But before eliminating lactose from your diet, it is important to test your extent of intolerance. Research suggests that many people can have a cup of milk every day (12 grams of lactose) without any or very mild symptoms. This is important because dairy is a common source of vitamin D and calcium. So if you can tolerate a cup of milk a day, it's better to use it to your advantage.

But even if a hint of lactose in your diet puts you in trouble, then it is advisable to cut out dairy and all the other sources of lactose from your diet.

What can you eat?

Some healthy food groups that are also lactose-free include:

July 29, 2022
This has been really helpful for me
This has been really helpful for me. A while back I had gotten the nutrition report from Xcode and it really helped me understand certain aspects of my diet. Fast forward about two years and I am sluggish, irritable, tired, etc. I discussed it with my doctor and they ran some bloodwork. Turns out I'm deficient in some vitamins and needed to supplement. I went back and reread my xcode report and they are the exact same vitamins that the report told me I would need to supplement. Turns out I don't metabolize them as efficiently and need some additional help to meet my requirements. Overall, it was a really great experience and I look forward to ordering more of the reports.
Katy Strong

July 7, 2021
In-depth results
I was curious to see the health insights Xcode had to offer since the 23andme health reports were a bit lackluster. I ordered one health report from Xcode and received results within an hour. This specific report was more extensive than 23andme and came with a helpful guide. I definitely want to order more tests but the only issue is there’s so many to choose from.
Rebecca Burwell