The DNA Blog » Genes and Nutrition » Genetics of Nicotine Dependence 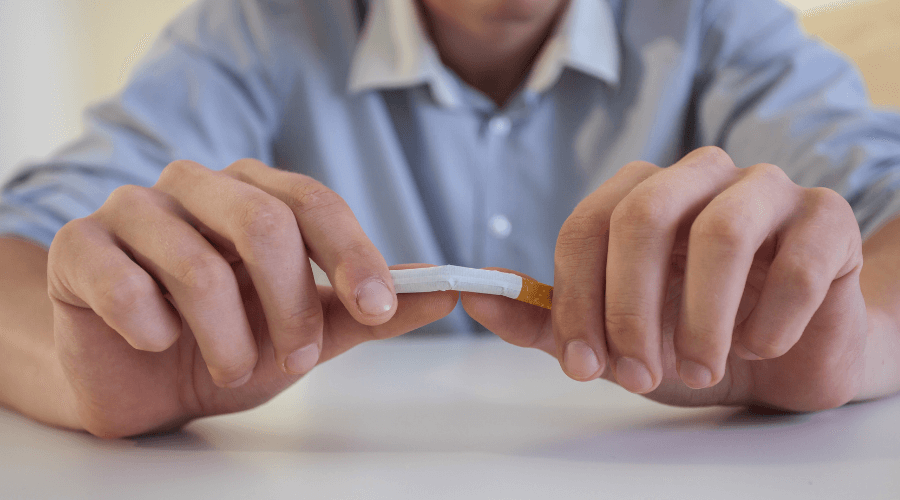 A 2020 study identified 5 regions of the genome linked to nicotine dependence.

In the sample report below, we've attempted to analyze some important genes that increase the risk for nicotine dependence.

You can identify your genetic risk of insomnia by using your 23andMe DNA data and placing an order for the Gene Nutrition Report.

Nicotine is a nitrogen-containing chemical and is a highly addictive substance. It is mainly found in tobacco and is primarily consumed by inhaling the smoke of tobacco cigarettes.

Nicotine produces ‘pleasurable and pleasing’ effects on the brain.

With regular smoking, you tend to get used to these positive feelings. Going without a smoke can make you experience unwanted effects - this indicates nicotine dependence.

According to the CDC, smoking is the leading cause of preventable death in the U.S.

A study suggested that smoking is responsible for 1 in every 5 deaths in the U.S.

The symptoms vary amongst individuals and also differ based on the level of dependence. Some signs to watch out for include:

The addictive quality of nicotine is what causes nicotine dependence.

Nicotine triggers the release of the happy hormone dopamine.

This pleasure response is what smokers chase after.

People who smoke nicotine start craving the dopamine rush. When they abstain from smoking for a few hours, their hormone levels start to drop, and they start to experience undesired effects like irritability and anxiety.

Nicotiana tabacum is the type of nicotine found in tobacco plants. The tobacco plant has been used for its medicinal benefits for at least 200 years.

“It is thought that Christopher Columbus discovered tobacco while exploring America for the first time.

Using tobacco for smoking started and spread rapidly over the 1600s. When it was introduced in Europe, some saw its medicinal purpose, while others viewed it as a toxic, addictive substance.

Tobacco usage exploded when cigarette-making machines were introduced in the 1880s.

Only in 1964 a study established a link between smoking and heart and lung cancer was published. 30 years later, in 1994, the U.S. FDA recognized nicotine as a drug with addictive properties.

Finally, only in 2009 the Supreme Court granted the FDA control to establish some nicotine regulations.

The Role of Genetics In Nicotine Dependence

A person may have smoked cigarettes in his youth and would’ve had no trouble stopping it after.

Another person may enjoy recreational smoking but not feel the need to smoke a few every day, and a few others may smoke a pack a day and cannot seem to quit this habit.

So, what contributes to these differences in smoking patterns? Why are the pleasure-inducing effects of nicotine evident in some and not in others?

Some studies have revealed that the differences in response to nicotine can be attributed to changes in some genes that produce receptors to which nicotine binds.

Let’s dilute this further. Nicotine has a similar structure to the neurotransmitter acetylcholine.

Acetylcholine is known to influence memory, arousal, attention, and mood.

These subunits are produced by certain genes.

These alterations modify how you respond to nicotine.

The CHRNA5 gene contains instructions for producing the α5 subunit of the nAch receptor.

Certain changes or mutations in this gene alter the α5 subunit and makes the nAch receptor channels more/less sensitive to nicotine.

The A allele has been associated with “enhanced pleasurable responses” to a person’s first cigarette.

Interestingly, the A allele has also been associated with a lower risk for cocaine dependence!

The CHRNB3 gene contains instructions for producing the β3 subunit of the nAch receptor.

This gene has been identified to predispose an individual to nicotine addiction.

Several other genes like CHRNG, CHRNA4, CYP2B6, and FMO also influence the risk of nicotine dependence.

Other Risk Factors of Nicotine Dependence

Age: According to a study, the chances of developing nicotine dependence are higher when the age of onset of smoking is before 21, especially between 18-20 years.
Peers: People who grow up with smoking parents or spend more time around friends who smoke are more likely to smoke and may eventually develop nicotine addiction.
Substance usage: People who consume alcohol or drugs are more likely to become nicotine dependent. The reverse relationship is also true! In fact, according to a study conducted to evaluate concurrent use of alcohol and cigarettes, approximately one-third of current drinkers smoked, whereas approximately 95 percent of current smokers used alcohol.
Mental illness: People with mental troubles like depression, PTSD, or schizophrenia are more likely to be smokers than others. A study examining depression and nicotine dependence from adolescence to young adulthood reported that depression is a prominent risk factor for nicotine dependence. The adolescent and youth population exhibiting depression symptoms constitute an important group that requires smoking intervention.

Using tobacco can lead to grave health complications. Nicotine dependence has been tied to an increased risk of various health conditions.

Lung and Other Cancers

Tobacco smoking, to date, remains the most established contributor to lung carcinogenesis or lung cancer.

Nicotine also decreases the levels of CHK2, a protein that acts as a tumor suppressor.

Further, it lowers the effects of anti-cancer treatments. Smoking contributes to 30% of all deaths due to cancer!

Cigarette smoking remains the leading cause of COPD in the U.S.

A CDC analysis revealed that the prevalence of COPD in adults was 15.2% among current cigarette smokers, compared to 2.8% among adults who never smoked!

Heart and Other Circulatory System Complications

Smoking causes damage to the heart and blood vessels.

It also alters your blood chemistry, contributing to plaque build-up. In the U.S., smoking accounted for 33% of all deaths caused due to cardiovascular diseases.

Research shows that nicotine influences the activity of the pancreas.

The usage of nicotine leads to decreased production of insulin by the pancreas.

Smokers with diabetes may require higher insulin doses to keep their blood sugar levels in check.

Tobacco smoking during pregnancy increases the risk of morbidity and mortality in newborns.

Nicotine damages the developing lungs and brain of the fetus.

Common birth defects caused due to nicotine are cleft lip and cleft palate.

However, the safety of NRT to the developing fetus has not been well-documented yet.

Nicotine withdrawal is the set of symptoms one experiences upon stopping tobacco usage. It can start as early as 30 minutes from the last usage.

The range and severity of symptoms can depend on how long the person has been smoking and how often they have smoked.

Owing to the withdrawal symptoms, quitting smoking can be very challenging.

The following are the basics of any de-addiction program which can help you overcome nicotine addiction.

Other specific ways can help you gradually become nicotine-independent.

It is the process of administering the nicotine that your brain demands more safely by avoiding all the other harmful substances present in cigarettes.

This also provides relief from the withdrawal symptoms.

NRT supplies lower doses of nicotine at slower rates. Some of the commonly available NRTs include:

All of these are generally available over the counter and do not require prescriptions.

Certain medications do not contain nicotine but are designed to produce the same effects of nicotine on the brain.

They help decrease cravings and alleviate other withdrawal symptoms. Some examples of these medications include Chantix and Zyban.

Important note
In 2009, the FDA mandated the makers of such medications to put a black box, warning the users about the possible dangerous psychological effects, including agitation, depression, and suicidal thoughts.

CBT trains smokers to cope with the symptoms of withdrawal. CBT has achieved twice the success rate when quitting smoking (compared to people who didn’t receive CBT).