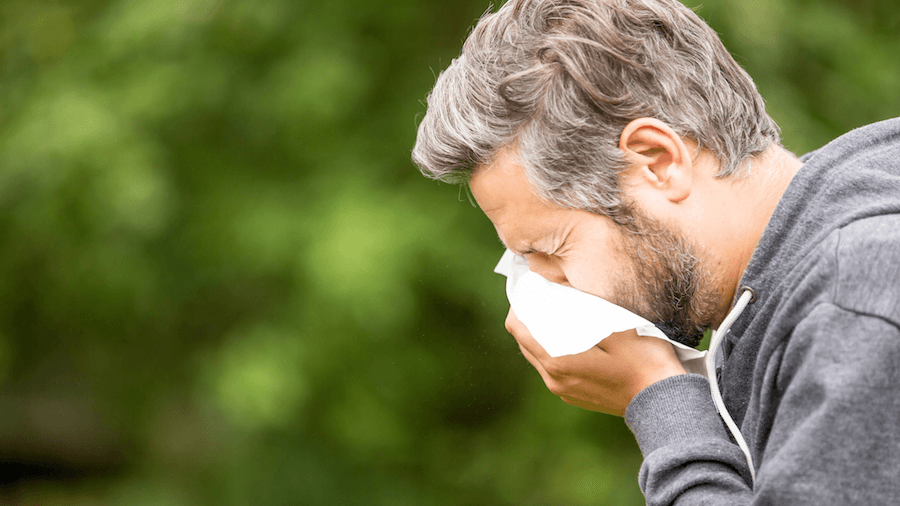 Do you find yourself down a sneeze spiral every time you enter daylight from a dimly-lit space like a movie theater? If sunlight makes you go ah-choo, you might have a genetic condition called the ACHOO syndrome!

Why Does Photic Sneeze Occur In Some People?

Individuals with ACHOO begin to sneeze reflexively when exposed to sunlight.

Scientists do not have a clear idea of how or why this happens, but they hypothesize that it may be due to the over-excitation of the visual cortex upon light exposure.

The visual cortex is the region of the brain that receives, integrates, and processes visual information relayed from the retinas.

When the visual cortex gets excited, it strongly activates secondary somatosensory areas in the brain, resulting in sneezing.

Do Genes Cause Photic Sneeze?

Research initially suggested that photic sneeze was probably due to a single change in a particular gene, looking at how the trait was passed down through families.

However, over the years, more research has come to light that suggests the involvement of several genetic changes.

One such gene is ZEB2. This gene produces a protein that regulates many important developmental processes, particularly neuronal development.

Deviated nasal septum (when the nasal wall moves from the original place) can put you at risk for photic sneeze reflex!

Curious about your photic sneeze genes? Here’s how you can learn about it in 3 simple steps:

May 31, 2021
Simply the best DNA service
I am very pleased with Xcode professional service. My comprehensive reports was generated fast. I could find out a lot about my health, allergy, fitness, nutrition and skin info I never knew before from my raw DNA data. Xcode has the best deal prices on the internet. Highly recommended you won't regret.
Stephen D

June 15, 2021
The D'Alessio clan ordered Mega Packs
The D'Alessio clan ordered Mega Packs for everyone. The information gleaned from the reports was more robust than what one would find from 23andMe. I really liked the recommendations as well as a good jumping-off point for more research into mitigating possible health problems. I recommend this to anyone interested in biohacking their health.
Chelsea B

August 7, 2022
Highly recommend for cutting edge research
Although sceptic of any third party genetic research company, I referenced all of the results I received with my raw data and the scientifically reported papers and they all were accurate in both my genome and scientific results. I appreciate the work being done by this company and the resources they provide.
Emilie Ellenberg