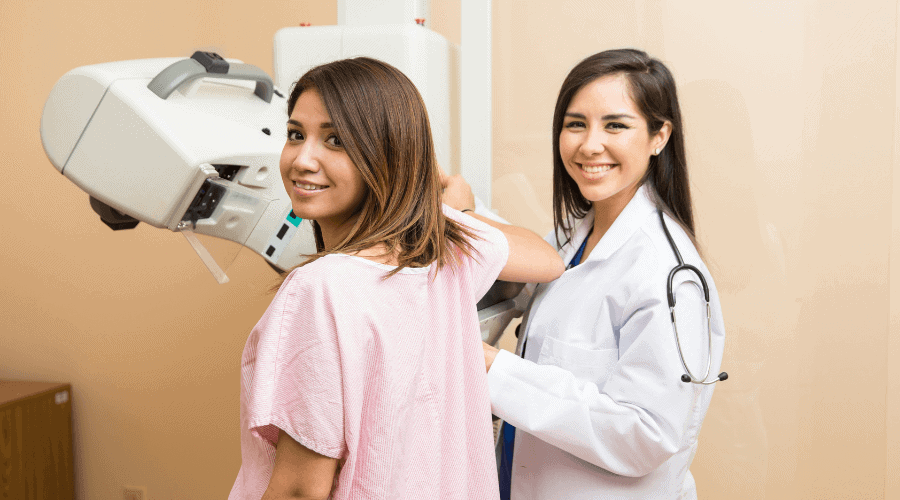 There are two types of radiation depending on how they affect other atoms and molecules.

Non-ionizing radiation: This is the type of radiation that human beings are regularly exposed to. The radiation is not strong enough to affect atoms and molecules in the body.

Ionizing radiation - This radiation is strong enough to ionize atoms and molecules. Ionization is the process of removing an electron from an atom and making it positively charged. Ionization causes electron/proton imbalance in the atoms, and this affects the cells in the body.

There are two categories of ionizing radiation sources - natural and artificial.

According to the United Nations Scientific Committee on the Effects of Atomic Radiation (UNSCEAR), there are four natural sources of ionizing radiation.

Radiation exposure can cause breast cancer in different ways.

Mammography is a diagnostic procedure that uses X-rays to check for breast cancers. In a diagnostic mammogram, a minimum of two X-ray films of the breasts is taken at two different angles. On average, the dose of radiation for these two pictures is 0.42 mSv (millisieverts). Dosage is the amount of ionization that occurs due to radiation exposure.

According to the National Breast Cancer Foundation, women over 40 years are advised to get their annual mammographic screening done. In addition, doctors may recommend more frequent screening in the following cases.

According to a study, women with large, dense breasts who undergo repeated mammography may be at higher risk for radiation-induced breast cancer and breast cancer death.

However, this number appears to be almost negligent when compared to the 968 breast cancer deaths (9.7%) that would have been averted by early detection from screening.

The H19 gene helps produce a molecule called the non-coding RNA. The non-coding RNA is considered to be a tumor suppressor and is protective against different kinds of cancers. Certain changes in this gene can encourage the growth and multiplication of radiation-damaged cells. This can lead to tumors.

rs2107425 is a single nucleotide polymorphism or SNP in the H19 gene. A particular study reports that people with the A allele of this SNP, are at a higher risk for developing breast cancer when exposed to high doses of radiation.

rs13181 is an SNP in the ERCC2 gene. In people with the wild AA genotype of this SNP, there is an association between occupational radiation exposure and breast cancer.

However, this association is not seen in the AC and CC genotypes.

Studies show that women under 20 are at the highest risk for developing breast cancer due to radiation exposure. According to these studies, women above 50 years have minimal or no recorded risk for radiation-induced breast cancer.

Few women may have undergone radiation therapy in the past, increasing the risk of breast cancer. Some women who are in the high-risk category include:

According to some studies, during pregnancy and breastfeeding, the number of weak breast cells affected by radiation is lesser, bringing down breast cancer risk.

Women with changes in these genes are already at a higher risk of developing breast cancer. Radiation exposure can increase the risk.

Get A Mammogram Only When Absolutely Needed

According to the American Cancer Society, women between the ages of 40 and 44 can start screening for breast cancer but don’t have to get mammograms unless their doctors instruct. Women between 45 and 54 need to get one mammogram a year. Women older than 55 should get two mammograms done a year.

If you are younger than 40, talk to your doctor and only get a mammogram if necessary. While mammogram screening helps identify tumors early and treat breast cancer early, getting unnecessary mammograms may trigger breast cancer in a few.

Check Your Occupational Exposure To Radiation

Control Other Factors That Lead To Breast Cancer

Lifestyle habits like smoking and drinking, excessive weight gain, the types of food you choose, and exposure to other environmental carcinogens can all lead to breast cancer.

Genetic testing will help identify how harmful radiation exposure is for your breast cells. You can also know if you are at risk for developing inherited breast cancer because of the abnormal functioning of the BRCA1 and BRCA2 genes.