The DNA Blog » Genes and Skin » How Genes Influence Freckles? 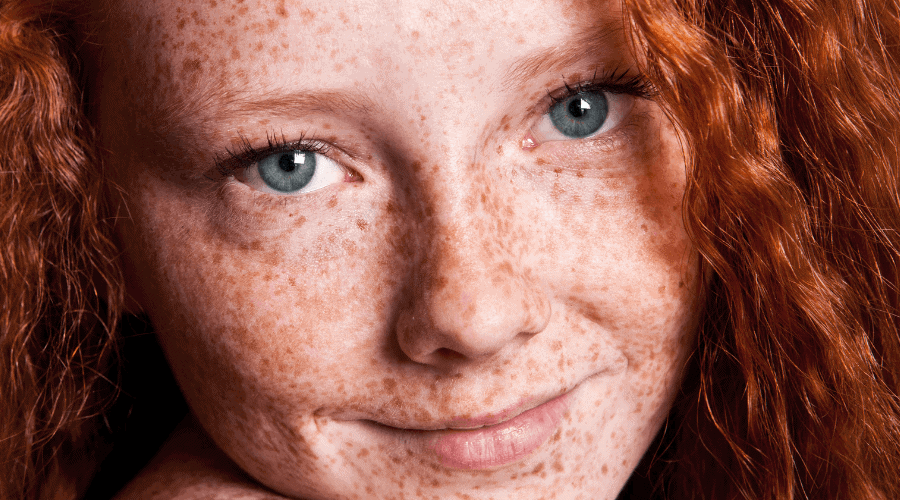 Freckles are small brownish marks that are present on the face of some people. They usually appear in sun-exposed areas.
They are mostly harmless and occur due to the overproduction of melanin (the skin pigment) in response to UV stimulation.
There are two categories of freckles, namely ephelides and solar lentigines.
1. Ephelides is the common or characteristic type of freckles. This type of freckles is common in people with light skin and is generally seen in people of Caucasian and Asian descent.
2. On the other hand, solar lentigines are dark patches of skin that include aging spots and sunspots. It tends to appear in older Caucasians (above the age of 40yrs).

There appears to be an evolutionary purpose for freckles in humans. People who lived in places with higher sun exposure had a darker skin color. This is due to the excess production of melanin, which protects the skin from the harmful effects of ultraviolet radiation (UVR). Lighter-skinned people often have ancestry that evolved with less exposure to sunlight. When they are exposed to greater amounts than usual, excess pigmentation occurs. Geographical location is a major factor in evolution that is linked to the development of freckles.

How Genes Influence The Development of Freckles?

MC1R or melanocortin-1 receptor gene contains instructions for the production of the receptor for Melanocyte Stimulating Hormone (MSH), one of the two hormones that regulate pigmentation. This gene plays an important role in the normal pigmentation process in the body.
Certain changes in the MC1R gene reduce the ability of the MC1R receptor to stimulate eumelanin (pigment responsible for lighter skin) production. This leads to melanocytes making more pheomelanin (pigment for darker skin).
The MC1R receptor is active in cells other than melanocytes as well. These include cells involved in the body’s immune and anti-inflammatory responses.
Several SNPs associated with the MC1R gene are primarily linked to fair skin, red or light hair, and freckles.
They also show a varying risk of melanoma and non-melanoma skin cancers.

rs1805008 and the Tendency To Develop Freckles
rs1805008 is also known as Arg160Trp or R160W. It is one of the many SNPs found in the MC1R gene and is associated with red hair color, especially in the Irish population.
The T allele is associated with an increased risk of freckles as well as melanoma. Individuals with TT alleles have an increased probability of developing freckles, 7-10 times more chance of having red hair, and a greater risk of developing melanoma.

There are a few non-genetic factors that increase your risk of having freckles.

Increased exposure to UV light
Exposure to ultraviolet light causes the skin cells to produce more melanin. This causes a dark pigmentation on the skin, including darker freckles.

Hormonal treatment
Hormonal treatment like oral birth control can increase the pigmentation by melanin on the skin. The cells that produce melanin, melanocytes, are also stimulated by female sex hormones, estrogen, and progesterone. When these hormone levels change because of treatment, hyperpigmentation occurs.

Despite the genetic component, people are not usually born with freckles. So, it is possible to avoid or manage it with a few tips and tricks.
- Use of sunscreen: Sunscreen protects your skin from the harmful effects of the sun and its UV rays. Those who are prone to freckles must apply sunscreen every time they step out. Using a sunscreen of SPF 30 or above can help avoid new freckles but may not help you get rid of the existing ones.
- Laser treatment: There are different types of lasers that target specific areas in the skin.
It can take about 2-3 weeks to recover from the treatment, and more than one session may be required to achieve the desired results. It is important to consult a qualified dermatologist before doing a laser treatment.
- Retinoid cream: Retinoid cream consists of vitamin A which can help lighten the freckles.
The retinoids in the cream help absorb UV-B radiation and prevent the formation of new lesions.
- Cryosurgery: This surgical technique uses extreme cold to destroy abnormal skin cells.
This method can treat or eliminate freckles, but it can have some side effects such as hypopigmentation or blistering.
- Fading Cream: Fading creams are available as OTC products that contain hydroquinone.
The hydroquinone present in these creams suppresses the production of melanin and helps lighten the darkened areas of the skin.
- Using a chemical peel exfoliates the damaged areas of your skin. When the damaged skin heals after a chemical peel, new skin appears without the freckles.

There are also many natural or homemade remedies to lighten or get rid of freckles.
1. Application of lemon juice to the required areas thrice a week can lighten the spots.
2. Homemade scrubs using milk, honey, and oats is another effective method to reduce freckles.
3. Milk products like buttermilk, yogurt, or sour cream have skin light

May 31, 2021
Simply the best DNA service
I am very pleased with Xcode professional service. My comprehensive reports was generated fast. I could find out a lot about my health, allergy, fitness, nutrition and skin info I never knew before from my raw DNA data. Xcode has the best deal prices on the internet. Highly recommended you won't regret.
Rebecca Burwell

August 7, 2022
Highly recommend for cutting edge research
Although sceptic of any third party genetic research company, I referenced all of the results I received with my raw data and the scientifically reported papers and they all were accurate in both my genome and scientific results. I appreciate the work being done by this company and the resources they provide.
Whitney Harper