The DNA Blog » Genes and Skin » Is Alopecia Areata Genetic? 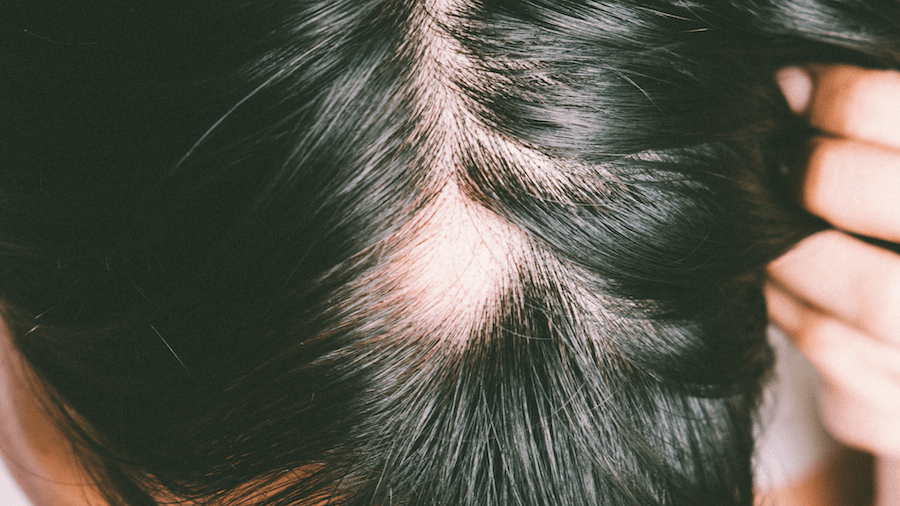 Did you know the lifetime risk for developing alopecia areata is >2%, even with no family history? Alopecia areata is an autoimmune disorder characterized by hair loss on the scalp or other body parts. In people with alopecia areata, the immune system attacks the hair follicles, causing them to shrink and preventing new hair from growing. Studies have shown that people with certain HLA genes are more likely to develop alopecia areata. This suggests that there may be a genetic predisposition for the condition.

What is Alopecia Areata?

Alopecia areata is a health condition that results in massive amounts of hair fall.

Most people with alopecia witness hair fall in small and round patches resulting in a coin-like appearance of bare skin.

While alopecia mostly affects the scalp, it can result in hair fall in other body parts like eyebrows.

It affects as many as 6.8 million people in the United States and 147 million worldwide.

Alopecia is the second most common hair loss condition after androgenetic alopecia and affects men and women equally.

Alopecia isn’t a painful or disabling condition; however, it can change a person's physical appearance, affecting their quality of life and self-esteem.

Most of the research shows that people with alopecia have higher levels of anxiety and depression.

There are two types of alopecia areata:

The role of our immune system is to fight off unwanted invaders that enter our body, like viruses and harmful bacteria.

In some people, the immune system goes into overdrive and starts attacking the healthy cells in the body, resulting in a group of conditions called autoimmune disorders.

Alopecia, one such autoimmune condition, occurs when the immune system starts attacking the hair follicles.

However, it doesn't destroy the hair follicles, so hair regrowth is a possibility.

The reason why the immune system goes into overdrive is complex and not well understood.

It could be a combination of many factors like hormonal imbalances and genetic changes.

The immune system involvement in alopecia suggests the role of HLA genes in alopecia.

The HLA complex plays a key role in guiding the immune system by helping it differentiate between the body's own proteins and proteins made by foreign invaders.

There are many types of HLA genes, each of which allows the immune system to react to different types of invaders.

Certain changes in these HLA genes can make the immune system confused and result in misidentifying the body's own cells as foreign.

Other genes involved in inflammatory processes also appear to play a role in alopecia.

Therefore, people with alopecia may be at increased risk for conditions like:

People with any of these conditions have an increased risk for alopecia as well.

As a result, the inheritance pattern is unclear.

However, it is evident that the risk for alopecia is heightened in siblings and children of affected individuals than in the general population.

A family history of other autoimmune conditions also increases the risk of alopecia.

Other Risk Factors for Alopecia

The risk for alopecia increases with:

Diagnosis and Treatment of Alopecia

The primary step in diagnosing alopecia areata is a physical exam to see the pattern of hair loss.

The doctor may also perform additional tests to reveal any underlying disorder.

The type of test your doctor may order depends on what they may suspect is causing the problem, which may be based on other symptoms.

Some common medications used to treat children 10 years or younger are corticosteroids and minoxidil.

They are also used in adults with patchy alopecia areata

Complete loss of hair is treated with contact immunotherapy, where the goal is to change your immune system so that it stops attacking your hair follicles.

March 14, 2022
I’m so glad I found Xcode!
Wow! The amount of data and reports that you get after just an hour’s wait is immense! I finally have some answers I always wanted from my original dna company (ancestry). All I had to do is upload the data and after a short wait I received all of my reports. If you are unsure of which package to buy - do the biggest - it is so worth it!
Seb B

July 2, 2022
Go there, they are the best!!!
Wonderful place to get an analyze of your DNA. It can take some time, but the details you get are OUTSTANDING!! This is brilliant service. Great customer service as well. I love this place and can only recommend everyone to take this. Worth the wait, worth the result and gives you answers to your life. Do not hesitate, go here, let them analyze your DNA, top notch service!!!
Samantha Jones

May 30, 2021
Finding out random genetic variations
Finding out random genetic variations you might be predisposed to. It gives out likely or unlikely expressions you might have. I got the health, fitness and nutritional pack and I saw confirmations of experiences that I've uncovered about myself, like having unordinary grip strength. It's neat to have this kind of validation and proof! I plan to reference my xcode pdfs since there's a lot to digest! I find the vitamins my body would likely prefer to be my favorite part of it. I want something more definitive to understand myself, like not what's "likely", but genes are complicated and xcode just provides what's likely and that's ok. What I would prefer is probably a whole other complex science. It was worth it.
Katy Strong